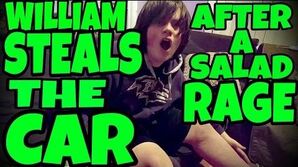 The video starts with William saying he wants Violette to make him food, but Violette refuses because he is not talking nice and not using his manners. When Violette says "please and thank you", William misunderstands it and says "you're welcome". When William says "May you please make me SOME FREAKING FOOD?", Violette decided to make William some food despite the fact that he used his manners in a rude tone.

The camera then cuts to where Violette makes a salad for William. Violette goes to give William the salad, but finds he has fallen asleep on the couch. Violette tells him to get up and that she made him food.

When William sees the salad, he asks if it's his dinner, because he doesn't like salads, and Violette says that it's the start of his dinner. William ungratefully accepts the salad and comments that it's like eating leaves and that it is disgusting. Violette says that William isn't getting enough nutrients because he is not eating healthy. William starts throwing some of the lettuce in the floor and comments on how some of the lettuce look like a freaking sea creature and the insides of an animal. William refuses to eat the salad and tells Violette to shove the salad up her butt, which Violette finds offensive, so she tells him not to talk to her like that and she won't help him if he's gonna be rude like that.

After Violette tells William to not talk to her by shoving a salad up her butt, William then calls Violette an idiot and Violette calls him a idiot back and then they call each other idiots. Violette gets mad and tells William not to call her an idiot or tell her to shove a salad up her butt and said it's rude. William then gets frustrated after wanting Violette to get him Arby's but she refused because of how rude William is being and then he has had enough of the salad that Violette made for him. He says that nobody likes salads, but that is not true. William eats some of the lettuce, spits it out quickly, throws the salad on the ground, stomps on it, and then throws a piece of lettuce at Violette.

Violette gets extremely LIVID, causing her to call William a jerk, tell him to go to bed and not eat dinner tonight, say that he's being a idiot as well as the fact that she doesn't want to talk to him because of his bad behavior. As William gets ready to leave to go to Arby's, Violette says it's too cold to ride his bike to Arby's but William shows Violette he has her car keys. William takes the car to go to Arby's with Violette trying to stop him but failing. Violette then goes back inside and looks at the mess that William made.

The video cuts to when William comes back home from Arby's. That is when Violette confronts him about how he didn't answer his phone or check his text messages and about his driving without a license and not picking up Mozzarella Sticks. She said, "I CAN'T BELIEVE YOU!" William checks his phone and says his phone was on silent mode and he didn't get the messages and tells Violette to let him eat in peace and eat the salad off the ground, but Violette tells him that she already had salad and says "The salad doesn't fill you up!". The video ends with William going upstairs to his room to eat his dinner.

Retrieved from "https://violette1st.fandom.com/wiki/WILLIAM_STEALS_THE_CAR_AFTER_A_SALAD_RAGE!!!?oldid=46997"
Community content is available under CC-BY-SA unless otherwise noted.