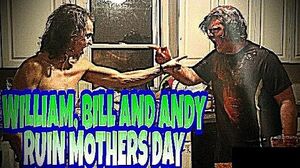 It is Mother's Day and Bill, Andy and William want to surprise her with a cake. In the beginning Bill, Andy and William prepares the ingredients (Red Velvet cake box, Icing and Letters for cake). Bill, Andy and William starts making the cake while William reads the procedures behind the box while Bill tells William to use 1 egg because it will save money, Bill and Andy gets the eggs and gives it to William and William starts to argue saying “We have to use all the eggs it says or it’s on or it’s gonna turn out”. Bill tells William to use 1 egg only that way that they will save money but William says “Are you stupid, are you actually stupid!!!”, and Bill tells William to “Shut up.” William starts to cut the plastic bag of flour and pour in the bowl while Bill and Andy is talking to William, while William takes the couple of eggs but Bill and Andy tells him 1 because it saves the money, Andy gives William 1 egg and Bill returns the eggs on the fridge, William says “What are you doing!!!” While Bill says “What you mean I’m doing ,what are you doing?” William needs more eggs but Bill tells him to put 1. William says “We need more eggs.”, Bill tried to make stuff and save money, William says “ARE YOU AN IDIOT?!!!” and Bill calls him a “Dingbat!!!”, William needs more eggs but Bill says “Don’t put 3!” and the argument increases. After Bill returns the eggs to the refrigerator, while William cracks the egg and spills, and Bill tells him “That’s your fault jerk.”, and William tells Bill to “shut up.” When William cracks the second egg, Bill says “You don’t even know how to break an egg.” William dashes to the fridge and get the third egg and William refuses to listen what Bill and Andy say. Bill adds oil and Andy adds water to the bowl, while William mixes the batter Bill and Andy grabs the bowl and restarts arguing. Moments later William shows the batter to the camera, William tastes the batter and Bill and Andy are grabbing the bowl again increasing arguments again and again. Fighting stops with the bowl, William pours the batter in the glass tray. Next scene Violette arrives and enters the house saying “Hello Hello.” William tells Violette to get out from the kitchen to the door and Violette hears arguing causing her to go back to the kitchen seeing Andy and William fighting making stains on their clothes with the red velvet cake batter. William grabs the batter from the glass tray and Bill says “ THAT'S HER CAKE JERK!!!” William throws the batter to Bill and causing arguments more. William takes the icing and Andy says “Unfortunately it’s ruined now” after Violette says “What in world, what is that red stuff”. Bill says “Look what you did to me jerk you ruined my freaking Florida shirt!!!” Bill tells Violette that the cake was for Mother’s Day since she's going to work on Sunday. Andy says that William ruined the cake causing William to smear Bill's face with batter making like a Red Skull (from Captain America's First Avenger). Bill tells William to stop, Bill goes to the door and William argues that he will buy her a new cake. Andy and William continued to fight until the end of the video, Violette signs off the video with the Bonus footage.

Retrieved from "https://violette1st.fandom.com/wiki/WILLIAM,_BILL_AND_ANDY_RUIN_MOTHERS_DAY!!!?oldid=51175"
Community content is available under CC-BY-SA unless otherwise noted.