Violette finally gets a new Comcast Internet that has faster Internet speeds, but William doesn't know about it yet. When William comes home with Bill, Violette and Bill decided to tell him, but William ran upstairs to play Xbox. Violette tried calling him down and when William answers and asks what Violette wants to tell him. William asked is it about food and Violette replies no and William doesn't care and goes back to playing Xbox. Bill tries several ways to get William's attention to get him downstairs to tell him the new like calling him down and going upstairs to talk to him to come downstairs but none of them worked, so Bill tried turning off the old router. When William see that Bill turned off the old router, he then comes down and turned it back on and yells at Bill with Bill trying to get him to stay downstairs but William goes back up again to play Xbox not listening to Bill. Violette and Bill then wonder how can they get William down and listen to them and mentions that Carly the Cat is hiding behind the TV in their living room. After hearing William raging upstairs, Bill tries one more time to call him down but still William refuses to come down, which gave Bill another idea to unplug the router and take it with him along with telling Violette to block the stairway, so William can't get through because William is still not listening to his parents. When William sees that the Internet was off again he gets so angry that he threw a part of a vacuum cleaner down the stairs and Violette gets angry and said she won't talk to William because of his bad behavior. He then yells at her to move out of the way and hits her hand and then Bill later come back in the house with his chainsaw and chainsaws the old router. William watches in horror as Bill gets ready to rip the old router. After Bill sliced the old router in half, he tells William that's what he get for not listening to his parents. This causes William to go berserk thinking they have no Internet now. Violette tries shows William the new high speed router in the office but William continues to go berserk. After many more attempts to get William to stop with his bad behavior, William finally calms down after Violette shows him the new Comcast Internet router. William is speechless for awhile and looks at the new router and then he eventually cheers as loud as a jet engine. When he goes upstairs to see how fast his game is being downloaded, he gets elated. Violette threatened to turn off the Comcast router if William doesn't apologize to his parents and he does so. When Violette asked William if he is really sorry, he comes out of his room and gives Violette a hug as his gratitude for the Comcast router, tells his cat Whiney he loves him by holding him like a baby with Whiney lying on his back in William's arms and then said he was sorry to his parents. Violette tells William for now on if his parents have something to tell him, he needs to listen next time, which is a very good lesson for all of YouTube. 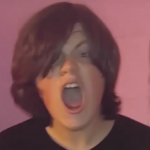