Violette1st Wikia
Register
Don't have an account?
Sign In
Advertisement
in: Videos, Food, Andy Getting Blamed By Bill,
and 14 more 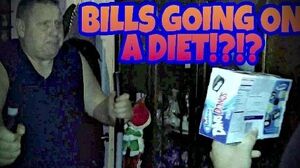 After what happened in BILL HAS FALLEN AND HE CAN'T GET UP!!!, Bill has started to become concerned about his current weight and has decided to start losing a majority of the amount of his current weight, not eat any sweets and has especially given up drinking beer. When William finds a box of Ding Dongs in his bag, he thinks Bill ate some. He goes to confront Bill for it, where he replies that they aren't his. He says Andy put them there, in an attempt to get him in trouble. He even blames it on the dog. For a while, William and Andy tease Bill by eating Ding Dongs right in front of him. Bill tries to get the Ding Dongs after getting off his bike, and at the end, Bill finally admits the Ding Dongs were his and that he also drank some beers after William earlier mentioned about the empty cans he found in the trash.

Community content is available under CC-BY-SA unless otherwise noted.
Advertisement